The Pursuit of Peace, The Martial Arts Tradition Continues 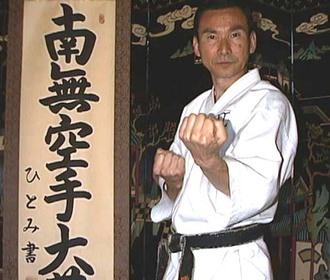 Born in Tokyo, Japan in July 1946, Kenshu Hideo Watanabe started training and competing in local Junior sumo competitions between the ages of 8 to 13. At the age of 15 he seriously began his study and training of Budo (Martial Path) and has been continuously studying and training ever since.

In April 1962 at the age of 15, Kenshu Watanabe started Judo training and in under 3 years he attained the rank of Nidan (2nd Dan) in Kodokan Judo.

In 1963, while he was also training in Judo, he was initiated into the ranks of Goju-Ryu Karate-do by Master Masashi Sudo.

In 1969, he became a member of the Legendary Tokyo Karate Team (including top J.K.A. instructors such as Mr Iida, Mr Takashina, Mr Takahashi and Mr Hayakawa) and competed in the first All Japan Karate Do Championships conducted by the Japan Karate Do Federation. The results were: Tokyo A & B teams won 1st and 4th, and Mr Iida won First place in Individual Kumite. There were no kata events at this championship.

In 1972 Kenshu Watanabe left Tokyo for his new post at Seiko Time Corporation in Toronto, Canada where he stayed for just over 3 years. While in Canada he practised karate at Sensei Tsumura's Karate Dojo (Itosukai Shito Ryu) and Sensei Tsuruoka's Karate dojo (Chito Ryu and Shotokan) as a guest instructor. Kenshu Watanabe thoroughly enjoyed the training with both Sensei and students, and is still very grateful for their kindness and support.

In 1975 He was awarded the rank of Godan (5th dan) by the Japan Karate Do Federation, which at the time was one of the youngest 5th dans in the federation.

In October 1977 Kenshu Watanabe came to Sydney, Australia to work for Seiko Australia.

In 1979 he received his Bubishi Masters degree in Goju-Ryu Karate-Do from his teacher, Master Masashi Sudo.

In 1982, his Karate organisation, Shubukai was admitted into the Australian Karate Federation.

In 1983, Kenshu Watanabe resigned from Seiko Australia to become a professional Karate instructor and was also accredited to National Referee by the A.K.F.

In 1986, He was accredited by the Asian Pacific Union of Karate Do Organisations Referee council.

Kenshu Watanabe's lineage can therefore be traced back through masters Masashi Sudo, Sosui Ichikawa, Kanki Izumikawa, and Seiko Higa to the founder of Goju-Ryu, Chojun Miyagi and his Master Kanro Higaonna which is defined as the Bubishi Goju-Ryu Masters Lineage.